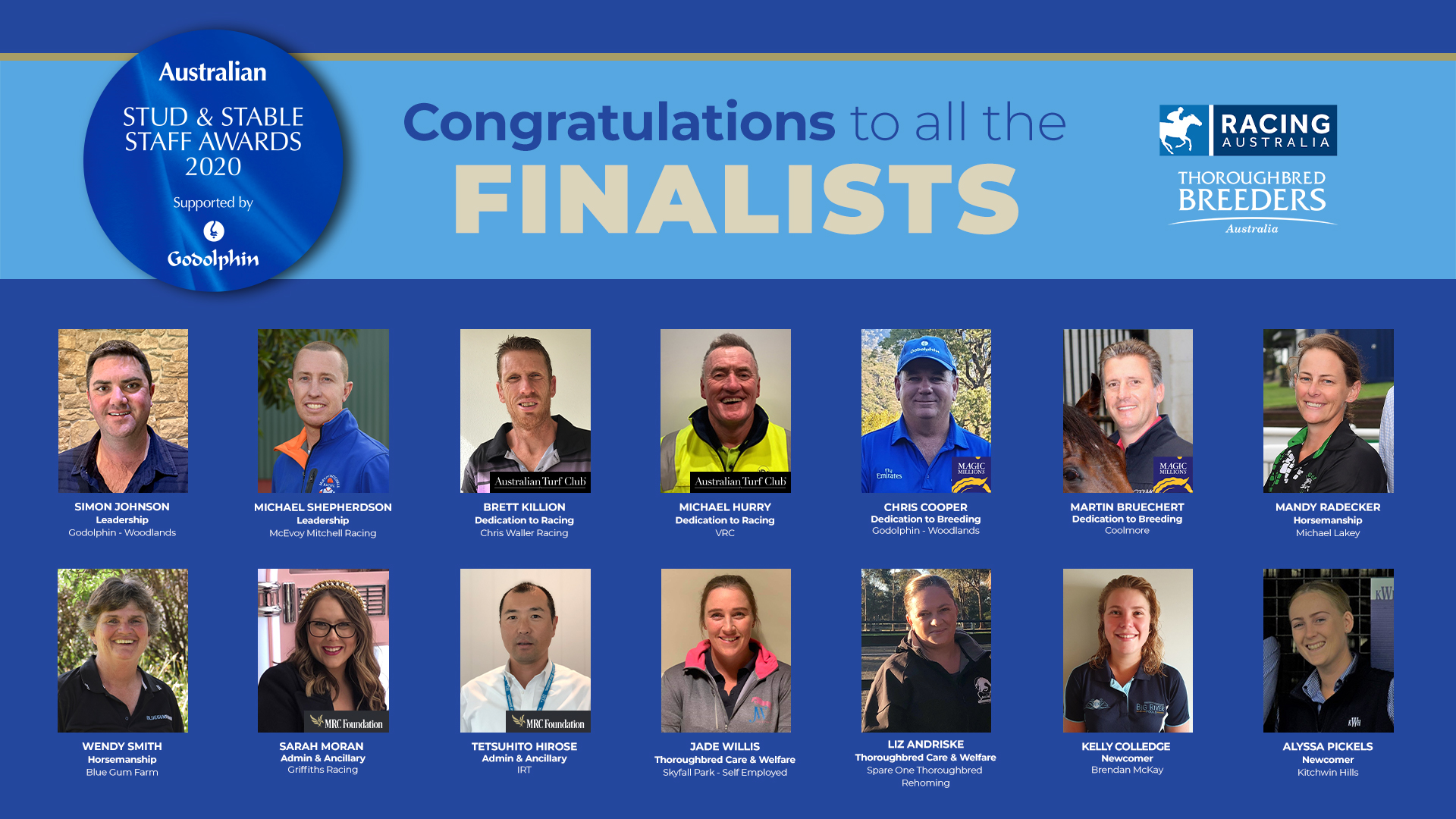 They represent the thousands of mostly unseen, often unsung and thoroughly essential members of Australia’s racing and breeding industry.

The 14 finalists announced today in the 2020 Australian Stud and Stable Staff Awards are the best-of-the-best in occupations ranging from mucking out stables, to administration, to education, riding, delivering foals, rehoming and retraining ex-racehorses and every other area of an industry that is one of the nation’s biggest.

People like Mandy Radecker, whose success as a jockey has been followed by a career curing problemed racehorses of their bad habits and passing on her knowledge.

Radecker’s nomination in the Horsemanship category is backed by the simple endorsement from her boss, Queensland trainer Michael Lakey: “Mandy has dedicated her life to the thoroughbred horse.”

Two of this year’s finalists, Kelly Colledge in the Newcomer category, and Sarah Moran in the Administration and Ancillary category, both demonstrated great resourcefulness in difficult circumstances.

The relatively inexperienced Colledge took over the running of Grafton trainer Brenden Mackay’s stable when he was diagnosed with a brain tumour.

As Mackay said: “Kelly saved my stable and is keeping my dream alive. She has a ‘next-level’ work ethic.”

Similarly, Sarah Moran, who worked in the office of Melbourne trainer Robbie Griffiths, stepped up when her boss was battling a brain aneurysm during 2019.

“I don’t know how we would have coped if Sarah hadn’t taken on a variety of extra roles. She was instrumental in keeping our business afloat,” Griffiths said.

Others, like Godolphin’s Simon Johnson, the Assistant Stud Manager at Woodlands Stud and a finalist in the Leadership Award, is commended as “exactly the person these awards were created for”.

Johnson, a highly accomplished horseman and dedicated educator, sees his role as a broad one.

“We have a duty to give everyone who comes into the industry and who shows a willingness to learn the opportunity to advance themselves,” Johnson said.

“These Awards recognise not so much the people like me, but all of those who give so much to ensure their farms and the industry are successful.”

In the Dedication to Racing category, Brett “Lofty” Killion has worked for some of Australia’s finest trainers over the past 25 years and is now the Brisbane foreman for Chris Waller.

Renowned as one of the few in the game who would arrive at Randwick before his first boss, Gai Waterhouse, Killion is described by his nominator as “honest, hard-working and ever-loyal”.

“Lofty has learned from people like Gai and her father’s legendary foreman ‘Spider’ Barker. He’s been influenced by a man with the outstanding horsemanship skills and eye of John Thompson and by the methodical search for perfection of Chris Waller,” his nominator, Reg Fleming said.

“He’s taken something from all of them.”

The Stud and Stable Staff Awards are supported by Godolphin worldwide and in Australia are staged by Thoroughbred Breeders Australia and Racing Australia with sponsorship from the Melbourne Racing Club Foundation, the Australian Turf Club and Magic Millions.

TBA Chief Executive Tom Reilly said the 2020 Awards are made against a testing background that has demonstrated more clearly than ever the value of those who keep the thoroughbred racing and breeding industry at their world-leading level.

“Australia was one of the few racing jurisdictions in the world where racing continued throughout the COVID-19 pandemic, and one of the reasons for that was the dedication and discipline of the entire workforce,” Reilly said.

“The SSSA’s again highlights the quality of those who work behind the front line in the most vital roles.”

“The work these individuals perform behind the scenes is truly remarkable and they are the true unsung heroes of our industry. Good luck to all the nominees,” Horton said.

The full list of finalists in the seven SSSA categories is:

A further $5,000 and a trophy is awarded for Thoroughbred Excellence to the category winner (except Newcomer and Care and Welfare) judged to have made an exceptional and significant contribution throughout the year.

The winners of each category will be announced in a virtual awards ceremony on Wednesday, June 17 at 7:30PM AEST via the Stud and Stable Staff Awards Website.