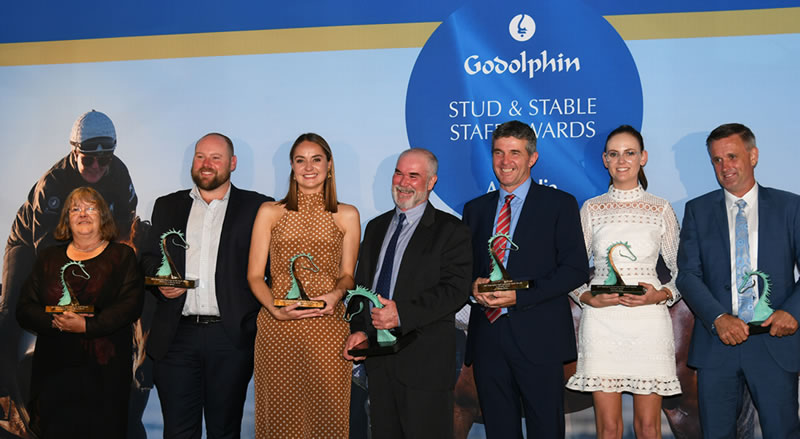 When David Merrick started working for Widden Stud in 1992, breeding legends such as Bletchingly and Marscay were ruling the roost, Paul Keating was Prime Minister, the Brisbane Broncos won their first premiership, Mabo was decided and we were watching shows like Acropolis Now.

Mobile reception? “Crikey, we were lucky to get TV reception,” Merrick says with a laugh.

Elevated to Stud Manager the following year, Merrick has been a mainstay for Australia’s most historic farm and, somewhat fittingly, was recognised for his service by being honoured with the ‘Thoroughbred Excellence’ gong at last Friday’s Godolphin Stud and Stable Staff Awards.

Last year Merrick was named the winner of the Hunter Thoroughbred Breeders’ coveted Murray Bain Award which acknowledges the outstanding achievements of those who champion exceptional service and hands on practice.

Merrick’s nominator, Widden manager Derek Field, praised him for his leadership, dedication and “a total involvement in every aspect of the business at any time of the night or day, year-after-year.”

“David’s passion and time and his selfless attitude of forever giving is something he should be proud of,” Field enthused. “His one-on-one relationships with our clients are testimony to the regard in which he is held and the utmost trust and respect of all who work with him. David has devoted his life to the breeding industry.”

Merrick was one of seven award winners who were chosen from a record 150 nominations from every Australian state and territory representing every area of the industry.

The Thoroughbred Excellence Award winner received a trophy and $5000 in addition to their prize for winning their category, plus an additional $2000 to fellow workers.

The GSSSA, sponsored by Godolphin and partners throughout the industry and convened by Racing Australia and Thoroughbred Breeders Australia, aims to recognise and reward those who work in all areas of the thoroughbred racing and breeding industry.

“The Awards are a brilliant concept by Godolphin and truly acknowledge so many of the unsung heroes in the thoroughbred industry,” Aushorse CEO, Tom Reilly, points out. “We revel in the deeds of superstars like Winx, but it’s all the workers behind the scenes that keep the trains running on time.

“I’m very proud of our own Cecelia O’Gorman, who has done a power of work in training up industry staff and was recognised in the ‘Administration’ category, while the Godolphin Awards are also supported by the Australian Turf Club, Melbourne Racing Club and Tabcorp.

“As we’ve seen with the record nominations this year, the Godolphin Stud & Stable Staff Awards are deservedly gaining greater traction and will undoubtedly encourage many other employees in one of Australia’s largest industries.”