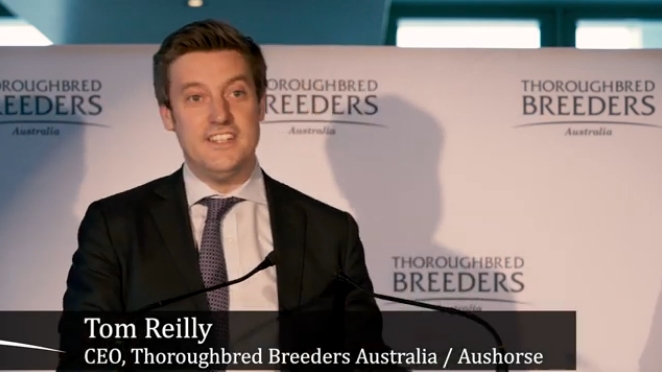 This event, now in its fourth year, is an important one for breeders as it gives us a chance to explain our industry to legislators.

Given the scrutiny that breeding and racing are under following the ABC’s 7.30 report, last night’s event was more timely than ever before.

I addressed the meeting first and made clear that TBA is committed to addressing any welfare issue.

“We have the courage and we have the determination to ensure that we have an industry that we can all be proud of,” Mr Reilly said.

“We must address the issues the ABC has raised. As an industry we will be judged by our response.”

There was support for the industry’s response to animal welfare issues raised in an ABC report about retired thoroughbreds last week.

Michael McCormack addressed the footage: “No breeder, no jockey, no trainer, no self-respecting person in the racing industry would want to see horses end up that way,” he said.

“It’s just not the way racing does things.”

“Whether it’s a little dusty country race track out in the middle of nowhere, or whether it’s the Murrumbidgee Turf Club which is a magnificent facility in Wagga Wagga and everything in between,” he said.

“Well done to you breeders, you owners and everyone involved.

“This government will always back you every step of the way, I know I share bipartisanship when I say that.”

Opposition Leader Anthony Albanese labelled what was shown on 7.30 as an outrage, saying it shocked him.

“I’m confident that your industry will work your butt off,” he said.

“You’ll open yourselves up to scrutiny because you don’t want any taint whatsoever.”

He said the combined racing and breeding industries provided almost $10 billion to Australia’s economy and about 90,000 jobs.

“I say on behalf of the Labor Party, it’s good you’ve got on the front foot,” the party’s leader said.

Mr Albanese said the national economy and people’s quality of life couldn’t afford for the industry to be damaged.

“We can’t afford, for what is overwhelmingly such a positive experience, to be damaged as well.

“We will do anything we can do to provide assistance.”

As well as last night’s event, I had a number of meetings in Canberra with politicians and senior bureaucrats to discuss possible actions in response to the ABC’s report.

TBA has also had meetings with Racing Australia and I hope to report on some initiatives shortly.

A copy of the speech I gave at the event is available here.

Please don’t hesitate to get in contact if you would like to discuss any of the above in more detail.