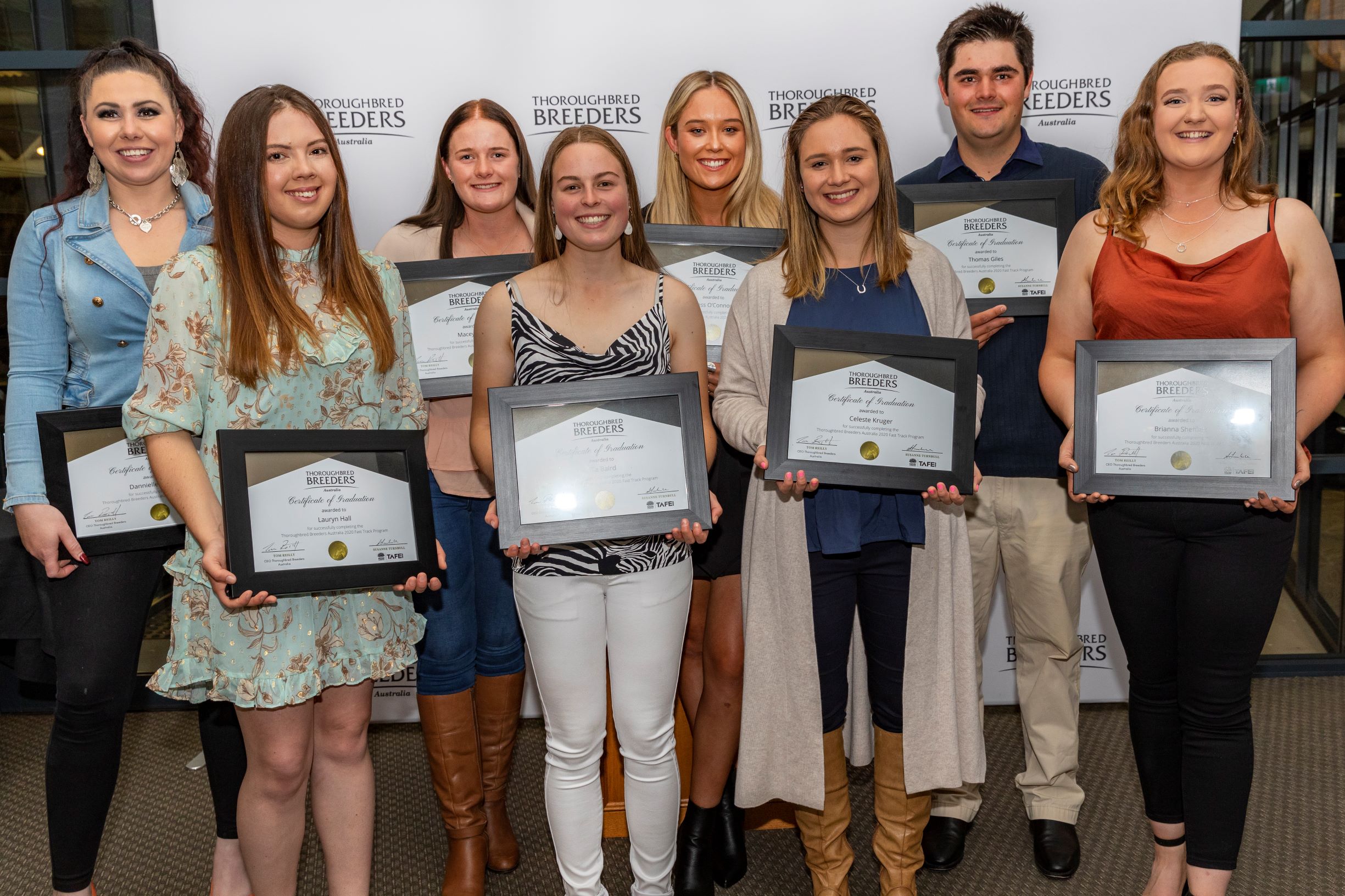 The third crop of the Thoroughbred Breeders Australia (TBA) Fast Track Program celebrated their graduation in a ceremony at Scone on Tuesday night.

Launched in 2018 by TBA in collaboration with TAFE NSW, Fast Track was designed to create a structured pathway to bring new workers into the breeding industry.

Over the past 12 months, the group have studied for a Certificate III in Horse Breeding while completing full-time traineeships with some of the country’s most respected stud farms, including Godolphin, Vinery, Widden, Segenhoe, Kitchwin Hills and Twin Hills.

“The program is now in its fourth year and it is proving a great way to bring people to our industry that would otherwise never come to work on a farm,” said TBA’s Chief Executive Officer, Tom Reilly.

“Our successful candidates have a mix of backgrounds; some having lots of horse experience, while others have never touched a horse, but have a passion for racing or interest in pedigrees before starting the course. Almost none of them, however, have a background with thoroughbreds.”

Along with the formal units of study, the program also includes a number of additional lectures from leaders in the industry, ensuring trainees develop a good understanding of different aspects of breeding.

There is also a strong focus on personal development and transferable skills with the group taking part in first aid, defensive driver training and float towing with NRMA, workshops on workplace behavior and mental health, as well as quad bike and side-by-side training.

“Fast Track does an incredibly valuable job bringing young people into the industry and we’ve had a great experience taking trainees every year,” said Mick Malone of Kitchwin Hills.

“Everyone running a farm knows how hard it is to find staff, so this initiative is really important.”

With three intakes having completed the program, some 90% of graduates are still working in the thoroughbred industry.

The group that received their certificates on Tuesday included trainees from every state in Australia, with the exception of Tasmania. Due to COVID restrictions the class size was limited and all students had to begin their placements on NSW farms.

“It’s incredibly rewarding to see the growth and development of our trainees over the 12-month period,” said Program Coordinator, Cecelia O’Gorman.

“Our 2020 graduates are an extremely passionate bunch and I can’t wait to see what they go on to achieve. In addition to those still working in Australia, we’ve had graduates complete the Irish National Stud Course, a two-time finalist in the Australian Stud and Stable Staff Awards Newcomer category, and just last week, one of our alumni was awarded a spot on Godolphin’s Flying Start program.”

The 2021 intake for Fast Track began in Scone last month with trainees from NSW, Queensland and South Australia. Applications for the 2022 program will open early in the New Year with more information available at tbaus.com 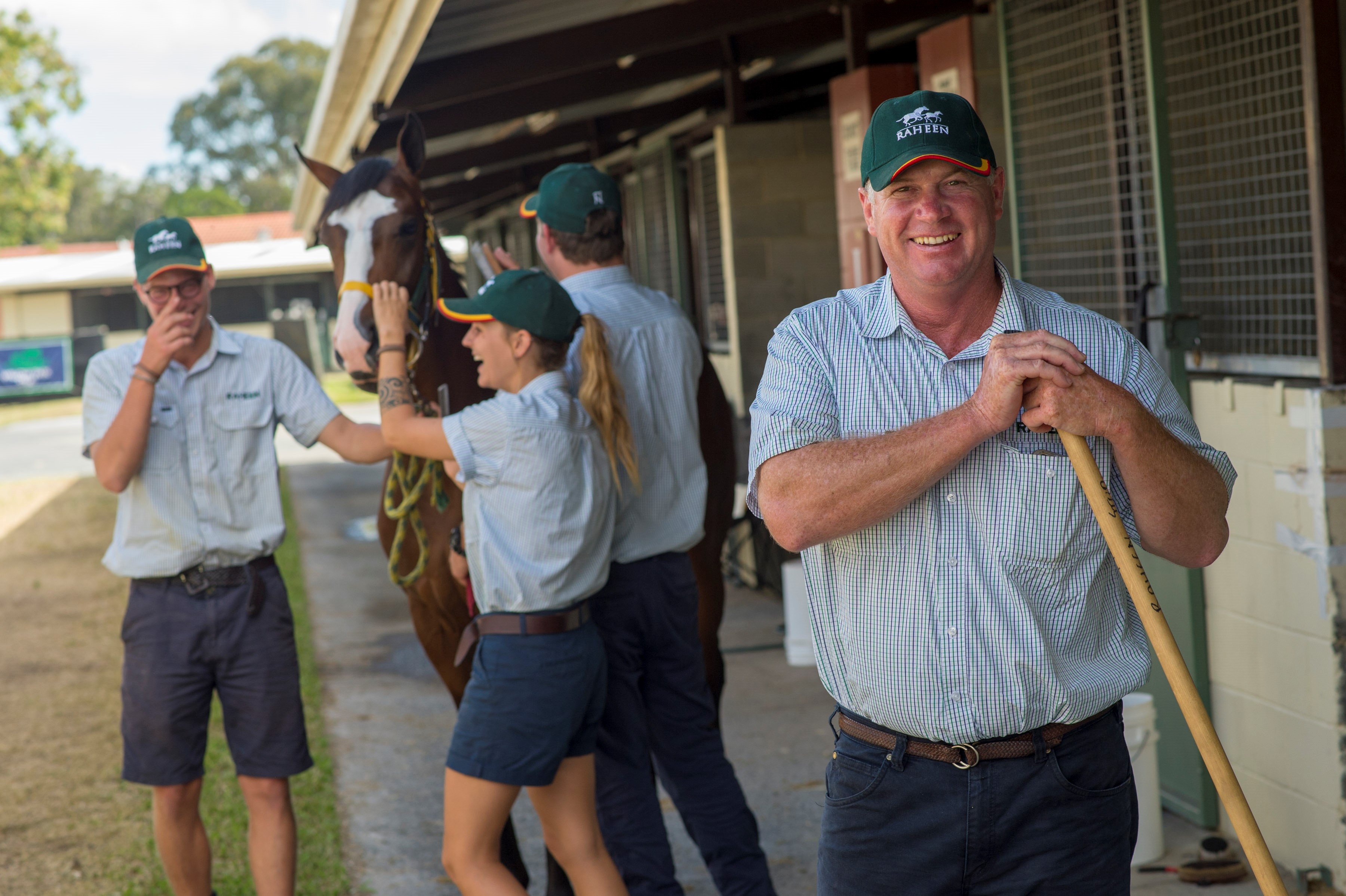 TBA chief executive Tom Reilly said everybody who knew Basil would be mourning his loss.

“On behalf of the directors and staff of TBA we extend our deepest sympathies to the Nolan family.

“Basil was one of the industry’s true gentleman. Not only was he a great horseman but, more importantly, he was a warm and generous man who always seemed to have a smile on his face.

“He was also a devoted father of four and it was always a highlight to have a chat to Basil and his children when Raheen had a draft to sell.

“I’m sure anyone who had dealings with Basil will be grieving his loss and that the whole breeding and racing community will be thinking of the Nolan family at this difficult time.”

Mr Morrison was joined by MPs from all sides of politics at Parliament House in Canberra to rally behind the industry in an event organised by Thoroughbred Breeders Australia (TBA) and the Parliamentary Friends of Primary Producers.

“It is a fair dinkum, very serious business and industry,” Mr Morrison said.

“It is one that provides significant economic and employment opportunities especially for rural and regional Australia.”

He said racing was synonymous with the identity of Australians, pledging to help ensure it remained a crucial part of the country’s fabric with ongoing drought support.

“This is a very big deal when it comes to the livelihoods and lifestyle of Australians,” the prime minister said.

TBA chief executive Tom Reilly was delighted at a huge turnout for the organisation’s event.

“We come to parliament house to talk about breeding and share the industry’s story, and tonight we had all sides of politics line up to pledge their support for what we do,” said Mr Reilly.

“It is testament to the fact that breeding and racing are truly part of the fabric of Australian society that so many politicians are here tonight.

Opposition Leader Bill Shorten, who has both Flemington and Moonee Valley within his electorate, said his side of politics heard the industry “loud and clear” on issues like drought relief and labour shortages.

“I understand that in this industry for a small number of people we need to bring in people from overseas,” the Labor leader said.

He said racing was a great industry that couldn’t be taken for granted, noting the importance of farming and racehorse ownership.

The Australian breeding industry is the second largest in the world, with an interim economic report showing breeding alone sustained almost 9,500 jobs across the nation.

The broader racing industry contributes over $8.5 billion to the national economy, according to the same research, and is responsible for some 69,000 full time jobs in Australia.

“This industry is really, really, important, it employs 69,000 people. All of the stud breeders around this room, you know what you mean to rural and regional Australia,” Mrs Marino said.

Hunter MP, and Shadow Agriculture Minister and co-convenor of the Parliamentary Friends of Primary Producers, Joel Fitzgibbon said the event had continued its history of reminding us the racing industry begins on a farm.

“Next time you’re at Randwick, Flemington or Moonee Valley think about where it all begins,” Mr Fitzgibbon said.

“An industry worth itself much more than $1 billion to our economy and a thoroughbred breeding industry that sustains about 10,000 people across the country – that’s what we want you to be thinking about tonight.”

He was more than happy to claim the association with Winx, who was bred at Coolmore Stud in his Hunter Valley electorate and on Saturday will seek to take her unbeaten run to 29 races.

Winx’s co-owners Debbie Kepitis and Peter Tighe were the star attractions, alongside the champion mare’s three Cox Plates which were on display as she shoots for a record fourth on Saturday.

“Lonhro was bred here. But nothing make me more proud than it’s an Australian product and also to think that I’ve got a better one than my dad and uncle – and my dad’s jealous,” she said.

Melbourne Cup winning jockey Michelle Payne, who is now forging a career as a trainer, reflected on her path to stardom aboard Prince of Penzance.

“The love of the animal and growing up with them, learning to work with them and building that association is what I absolutely love about the industry,” she said.

Mr Morrison set the tone of the event by lifting his limited edition Winx Carlton Draught can with a toast: “here’s cheers to the racing industry”.

Earlier in the day he had hosted the connections of Winx in his office to offer them a personal message of good luck as the mare seeks an unprecedented fourth Cox Plate.

In an exciting announcement for the Australian Thoroughbred breeding industry, a call for initial research project ideas, to be funded by new research & development levy, was made this week…

AgriFutures Australia is looking to fund research that will support the profitability and sustainability of Australia’s world-leading thoroughbred industry.

AgriFutures Australia has released an Interim Thoroughbred Horses Five Year RD&E Plan 2017-2022 and is now calling for preliminary research proposals (PRPs) that address one of the short terms goals specified under the six objectives in the RD&E Plan:

1. Continue to improve breeding outcomes and foal health and development
2. Reduce the incidence and impact of diseases and parasites in horses
3. Improve the safety of industry participants and the welfare of horses and enhance the sustainability of the industry
4. Promote education and training for the horse industry through opportunities for training researchers and by effective communication of RD&E to horse industry stakeholders
5. Industry planning, economic benefit studies and market research
6. Reduce injury and breakdown of horses in work and training

This is an exciting opportunity for researchers to contribute to the newly-formed Thoroughbred Horses RD&E Program.

Researchers are strongly advised to contact AgriFutures Australia prior to submitting a PRP: