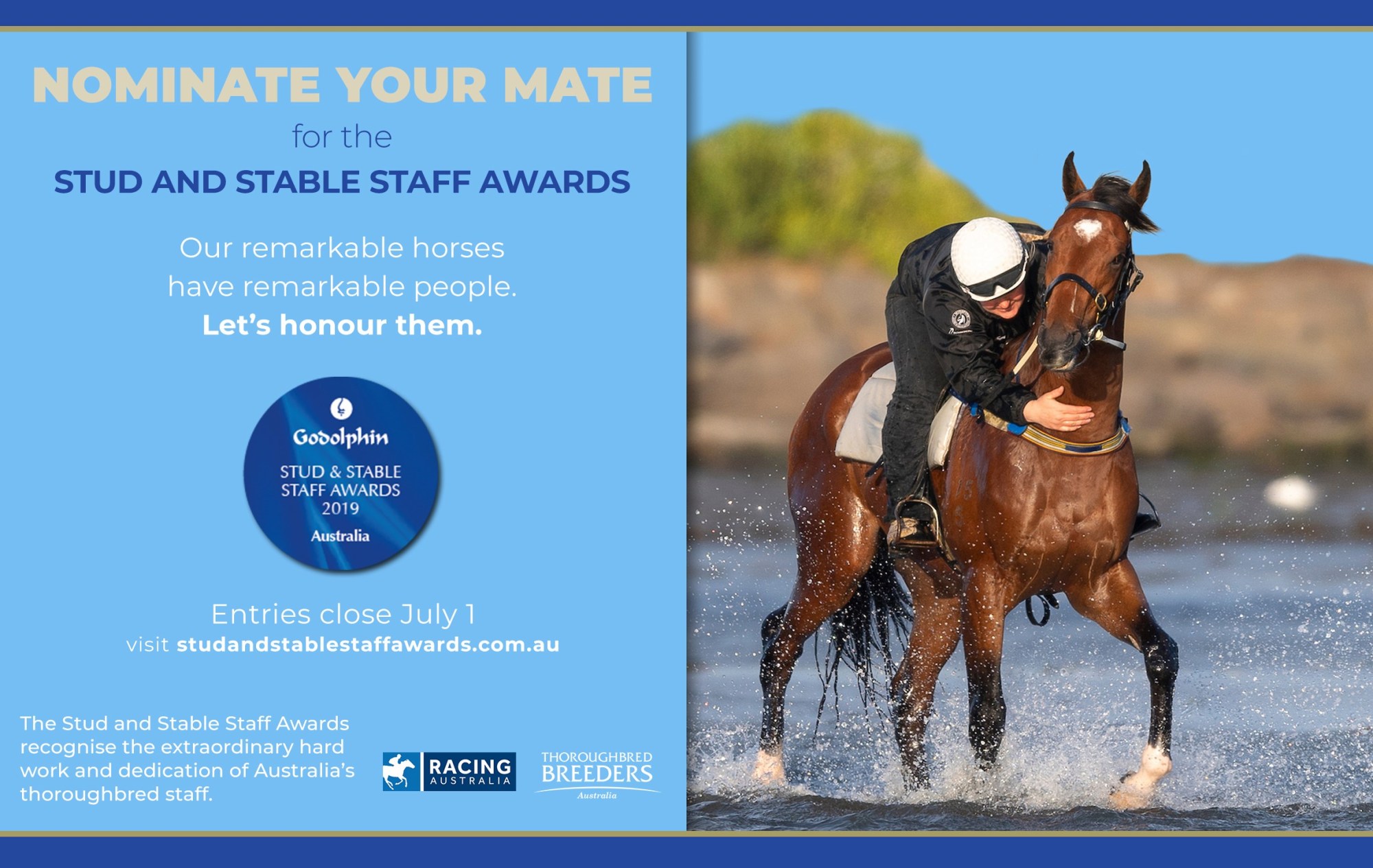 The day after Winx won her final race, her long-time strappers Umut Odemislioglu and Candice Perisijn were back in the real world, mucking out the boxes of regular racehorses.

Like the thousands who do what they do, they awoke at an hour closer to midnight than midday and went to work in the twilight world that is essential to the survival of the thoroughbred racing and breeding industries.

Odemislioglu and Perisijn are lucky enough to have had a world champion to look after.

For the rest of the unknown and largely unheralded workers on whom racing depends for its existence, it can be a thankless occupation.

To recognise their value to the industry and to showcase their roles, there are the Stud and Stable Staff Awards, for which the 2019 entries are officially now open.

First staged in Australia in 2015, the GSSSA, an initiative of Thoroughbred Breeders Australia and Racing Australia and sponsored by Godolphin, offer recognition to everyone in every “backroom”, every stable, stud or office in the Australian thoroughbred world.

From stable workers to exercise riders, to float drivers, to secretaries, to stud grooms, to foaling supervisors, to the growing band of “re-homers” who provide care and a future to horses who can no longer race, the GSSSA’s are open to everyone.

In so many cases, the industry workers who the Awards seek to recognise, perform their jobs simply because they love horses.

As the 2018 Thoroughbred Excellence Award winner, the trackwork rider, Joe Agresta says: “You couldn’t do it if you didn’t love them.”

“None of us does it for money, because there isn’t any. We do it because we love horses, love being with them, love looking after them.”

Jenny Watson, whose 35 years on the night watch looking out for mares to deliver their foals, at Armidale Stud in Tasmania earned her the Thoroughbred Excellence Award in 2016.

“I still think this is the best job in the world,” Watson says.

“To see a mare and a foal survive just because you are there is the most wonderful thing.”

To find the most deserving recipients, the GSSSA relies on anyone being able to nominate anyone.

Nominations will close on Monday, 1 July, 2019, and can be completed online via the Stud and Stable Staff Awards website www.studandstablestaffawards.com.au.

The GSSSA’s provide total prize money of $100,000 in seven categories plus an overall Thoroughbred Excellence Award made to the one of the five category winners.

The awards for the categories include $10,000 and a trophy, with $3,000 to their employer to be shared among fellow employees.

Tom Reilly, CEO of the Thoroughbred Breeders Association said: “These awards celebrate the most deserving people in the thoroughbred industry; the workers whose energy, endeavour, passion and resilience keep breeding and racing going all year around.”

“To trainers, breeders, business owners and administrators, I would encourage you to think of the people who are most deserving of recognition and nominate them. The finalists and award winners, not to mention their employers, get a huge thrill from being involved on the night that it is well worth making the effort of an entry.”

Greg Nichols, Chairman of Racing Australia said: “The Godolphin Stud and Stable Staff Awards, now in its 5th year, are a wonderful recognition and reward for the outstanding skills, commitment and contribution by the unsung heroes of our sport to the unparalleled success of Australian horseracing that is enjoyed today.”

“Racing Australia is greatly appreciative of the generous and unstinting commitment by Godolphin in establishing these awards and continuing its support culminating in the Stud and Stable Staff Awards being regarded as a pinnacle achievement within Australian thoroughbred horse racing.”

“We encourage our vast band of breeders, trainers, owners and racing management to participate by nominating those individuals who represent excellence in their chosen field of expertise.”